They say that hindsight is 20/20, that reflection brings clarity. They also say that grief is a journey one must walk through. Can’t go over it. Can’t go under it. You have to go through it. 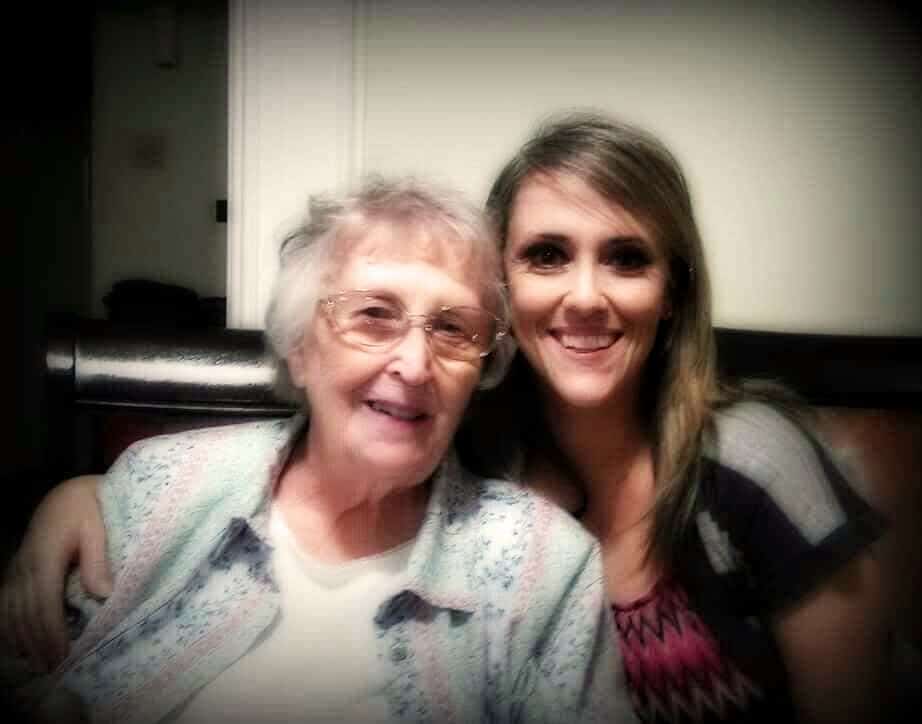 Earlier this month, despite my most earnest hopes against it, my maternal grandmother was released from her earthly life and responsibilities and granted her very well-deserved eternal reward. It’s devastating, and as I’m still very early in this journey, there’s even a shock to it. It’s inconceivable to me that I won’t get any more of her silly texts that sometimes read like Greek to me–especially if she typed it while doing something else.

For now, there are no more phone calls. No more teasing her when she says silly things. No more hugs. And I’m hoping I paid enough attention to how she made her cherry cheese pies and Thanksgiving dressing. Otherwise, I’m in a lot of trouble when the holiday season rolls around.

It’s interesting how a loved one’s passing triggers memories from days gone by: many we haven’t pondered in a long time. Instantly I was taken back to childhood. I routinely remember her funny quips, her most frequently-imparted quotes of wisdom, her favorite Scriptures, her little dog Jolie, the shade of her favorite lipstick, and and the way she looped her capital “B.” I remember her guidance when I had my first baby and the afghan she crocheted for him.

I remember her kindness, her devout faith, her joy despite times of adversity, her determination to exude love and share her heart with her family–many of whom were not even blood-related.

RELATED: Can we talk for a moment about PIXAR’s “Soul”?

She passed away just two days shy of her 96th birthday, and because of her long life, I will enjoy these musings and reminders and memories–both recent ones and those that were forged decades ago–for the rest of my time. More recently, I’m especially thankful for the memories I have from December 2020 as they relate to her, Christmas Day, and a beautifully-told PIXAR film.

That month, our nation had come to the end of a year that brought us to the pulse of our humanity with a pandemic that threatened us because we knew so little about it. Some members of our own family had been affected by COVID, and as such, we chose to celebrate the holiday season “remotely.”

I’ve cared for my grandmother for years, though she still lived in her own home. Christmastime meant special effort in taking her to look at holiday lights, stopping for Starbucks hot chocolate along the way, bringing her to our home to watch Christmas movies with my kids, having her in the room while I wrapped gifts so she could tell me I was using far too much wrapping paper “for that size package,” and laughing at the amount of tape she used when she wrapped. 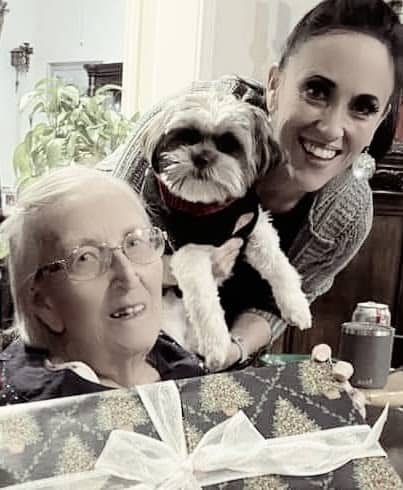 She had owned her own floral shop, and she was also a professional gift wrap artist. I’d do well to listen to her.

But December 2020 presented a different type of holiday season for a lot of people, my family included. As our plan was to forgo the huge family celebration with every member of the extended bunch at our house since some had been ill, I knew things would be different, and–truth be told–it made me sad. On top of that, my grandmother discovered she had a malignancy the day before Thanksgiving, and since she was 94 1/2 years old, I wanted to be sure this Christmas was one that stood out, should we have to part ways before the next one came around.

But for all my planning and determination about Christmas 2020 being stellar, it was a largely “regular” Christmas Day, if there is such a thing. But it was that simplicity that made it one of the most memorable in my life. Perhaps it was my renewed perspective about the brevity–and deep value of–life. She loved her gifts, she loved her coffee, and breakfast was “so, so good,” I recall her saying that December 25.

Once we dug ourselves out from under the rolls of wrapping paper that lay in crumpled, balled-up scraps across the hardwood floors of my living room, the kids dispersed and began sending Snaps, FaceTiming, and otherwise communicating with their friends and cousins about what they’d received from Santa Claus that day.

My grandmother, Mimi, took a nap.

As I sat on the sofa in the quiet, contemplating the meaning of Christmas and the strange joy I felt despite our recent news, I suddenly remembered that Disney+ had a Christmas gift for anyone willing to receive it that December 25. PIXAR’s Soul hit the streaming platform that day, and because I double as a PIXAR junkie, it was decided: we would watch Soul on my husband’s new projector that evening.

It seems I blinked twice, and evening dark had befallen us early, as it does during December. Everyone was stuffed from a very late lunch, so there was nary a taker when this Mom doled out the flavored popcorn, sodas, and appetizers I’d popped into the oven just before we began to stream the movie. Of course, that changed as the evening went on.

The movie began with the familiar Disney opening featuring Cinderella Castle and the steam train, but this time, with a ramshackle band playing “When You Wish Upon a Star” in the background. Fitting. On the surface, Soul is largely centered on a musical theme.

Instantly we got to know Joe Gardner, the film’s protagonist–a middle school band teacher who clearly has both a gift and an affinity for music–specifically jazz music crafted from the 88 black and ivory keys on his piano. I added the word trilling to my vocabulary that night, as the captions for the film use that word every time Joe takes to the piano to give sound to his passion.

I was taken away (as usual) by the beautiful animation, the colors in the film, and the music that was jazzy where it needed to be and just ethereal enough in other spots to keep us pensive, contemplative.

During one of the final scenes in Soul, PIXAR’s directors weave together the perfect harmony of a musical score and beautifully animated memories as Joe looks back on his life, searching for purpose and pondering why achieving his highest goal–playing with the Dorothea Williams jazz band at the Half-Note Club–still left him feeling empty. It’s a tear-jerker scene for sure, and I was overwhelmed by the emotions induced by the film. As the scene began, I looked around the room that Christmas night, and everyone was dozing: my kids, my husband, my mother-in-law, and Mimi.

It was a silent night. All was truly calm and bright, and I wanted to drink in every second of it.

I loved Soul from the very first time I watched it. For me, PIXAR had packed so much into each of the film’s 100 minutes that I had to go back and take it all in so as not to miss a single piece of it. And Mimi was in the room with me every time I re-watched it as she was staying at our house while she underwent chemotherapy.

During the first few months of 2021, she continued her treatments, and in May, we were so happy to learn that at 94 years old, Mimi had triumphed over her cancer. What a blessing.

But as her doctor shared the good news with us, my mind ventured into those “wonder-ifs.” When I expressed them to the doctor, his response was profound, poignant, and unbelievably timely: “It’s time to live,” he said, and I was reminded of Joe Gardner’s final line in the film, when asked what he planned to do after being granted a second chance at life: “I’m gonna live every minute of it.”

Several months have passed since I watched Soul. But a couple of days after her passing, I streamed it again, and the elements in the film were truer than ever. The message I had heard in the film that Christmas night in 2020 was now more profound, the meaning behind the film all the more prevalent.

PIXAR’s Soul never touches on the grief journey, or so I thought. It’s Joe’s story, after all, and as the storyline sees Joe passing away, it doesn’t focus on the grief of the loss of a loved one. However, as I look again, perhaps Joe grieves those missed opportunities, those moments he overlooked because he was so focused on the next big thing. And when he discovers that the “next big thing” was unfulfilling, surely he grieves.

As I watched the final scene again, called “Regular Old Living,” I was more moved than ever by Joe’s reflections and the clarity they bring to him. I was again brought to tears by the scene and by the instrumental arrangement that plays during the scene, called “Epiphany” by Atticus Ross and Trent Reznor.

How fitting. Joe Gardner finally has his epiphany, and it fills him with hope, with excitement, and with peace: the three things he expected to feel after playing with Dorothea Williams at the Half-Note Club.

Joe allows his mind to return to his childhood and young adulthood. His thoughts are filled with his mother’s love, his father’s gentle guidance, the wonder of fireworks, the joy in teaching a child to play music, the serenity of the ocean, the taste of pecan pie, the simple, momentary experiences with 22 in New York City.

His mind is flooded with the remembrances of experiences that added goodness and value to his life, and his heart is flooded with emotion. Not a single thought was focused on a spot in a jazz band or a seat behind a piano. Rather, Joe’s mind returns to the simplest of memories. And his epiphany brings him peace.

I think back to December 2020 and my determination to make the holiday celebration stand out from the others in case it was our last one together. But I’m reminded that despite my hopes and plans, it was the ordinary, the “regular old living” that Christmas Day and evening that make it stand out in my mind as one of my most favorite Christmases ever.

As I think back over our life together–Mimi and me–it’s not the flashy, loud, extravagant moments that bring me peace and fulfillment. Like Joe, I reminisce over the tapestry that has been woven together over our decades of days, and days of moments that were filled with laughter, silliness, taking it easy, taking it in, and in just being together.

As part of her celebration memorial, I had a film made of photos of Mimi with her family–her husband, her parents, her siblings, her 3 children, 8 grandchildren, 18 great-grandchildren, her 3 great-great grandchildren, and her friends over her 96 years of life.

Part of her film is set to the “Epiphany” arrangement from PIXAR’s Soul for two reasons: first, because she and I first experienced Soul together that Christmas night, and second because, just like Joe, we are allowed the honor of looking back over her life and experiencing the epiphany about not only the enormous value she added to our lives but also about the immense value of those experiences in life that often seem small or insignificant at first. 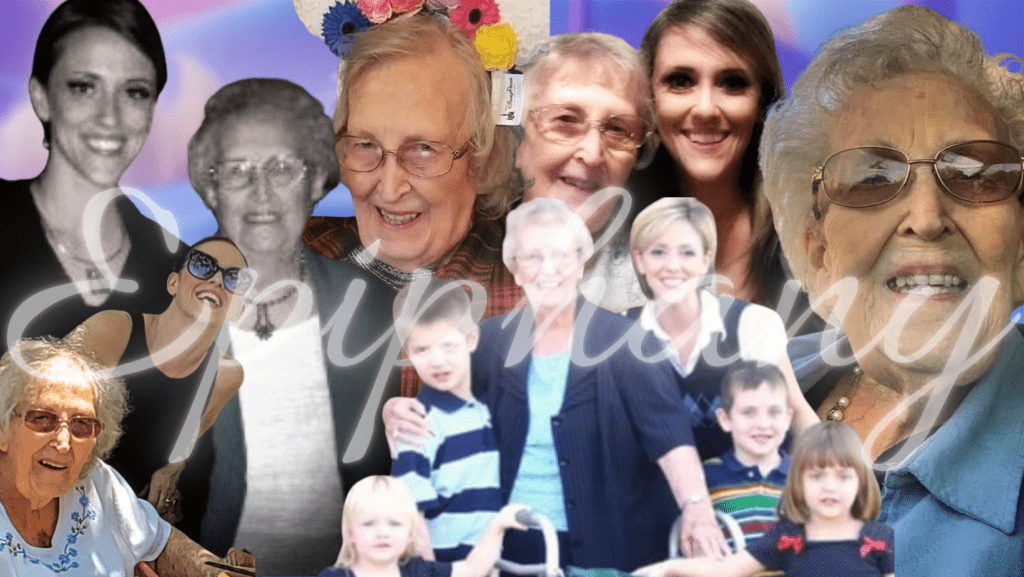 I love her, I loved our life together, and I love that message–heart and, well . . . soul.